The Archaeology component of the Phnom Kulen Programme aims to conduct archaeological research, train and provide experience to the next generation of Cambodian experts, conserve and protect the sites of Phnom Kulen, and systematically remove unexploded ordnance found on or around them. All these activities initiated by the ADF allowed the APSARA National Authority to extend its geographic coverage to the remote sites of Phnom Kulen.

Ravaged by civil war and neglected for many years, Phnom Kulen remains largely unexplored until this day and contains a myriad of significant archaeological remnants – from sculpted riverbeds and inhabited caves to ancient waterworks and temples. Only a limited number of these sites has been the subject of in-depth research. For most, only their location is known and a brief description of the structures has been made, but to date no field study has been conducted, and their role within the Khmer Empire is poorly known.

With the most recent studies, including the LiDAR campaigns (2012 and 2015; see below), ADF was able to reveal numerous archaeological sites from the IXth century city located on the mountain and has clearly improve the knowledge of the past in this particular area. 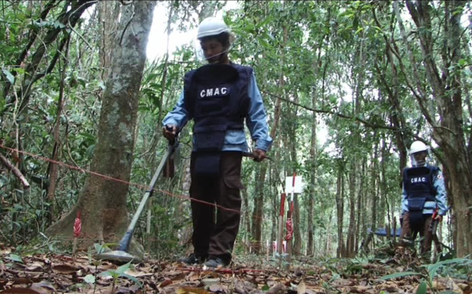 In order to conduct research on these areas, the ADF is collaborating with the Cambodian Mine Action Centre (CMAC) to systematically clear landmines and unexploded ordnance (UXO) from the study areas and in the surrounding villages.

​All the explosives devices found are rendered safe or destroyed on site if they can't be safely defused. Antipersonnel mines, one antitank mine, mortar shells, hand grenades and gun cartridges have been found in Kulen.

Between 2008 and 2016, more than 39 sites covering 39 hectares of land, have been checked and cleared from dangerous items at the request of the ADF and APSARA National Authority. Once the area is demined, the research and conservation work can be safely conducted. 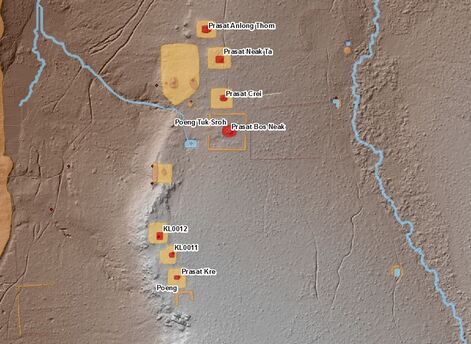 Since 2008, the ADF has been developing an archaeological map of Kulen in order to accurately locate all the ancient sites: temples, rock shelters, rock carvings and ancient water management structures such as dikes, channels and reservoirs. This map is constantly updated using a combination of historical documents, such as archaeological maps from the 1930s and 1960s, GPS records, satellite images, aerial photography.

ADF has participated to the 2012 aerial survey by LiDAR, a new technology using an airborne laser to detect structures under the forest cover. Within the KALC consortium, ADF has funded the Kulen acquisition part  and is still exploring the archaeological features discovered, with the support of the Ambassador's Fund for Cultural Preservation. The location of all well-known sites is confirmed by GPS, while exploration missions allow the discovery and documentation of new sites. The archaeological map is paramount to have a global view of the history of the area and understand how they are interconnected. This is also an essential tool for the authorities to manage the area.
The ADF team is also involved and associated with the second Lidar acquisition (April 2015) over the entire Phnom Kulen range, organized by our colleague Damian Evans from the CALI project, under the framework of the EFEO and funded by the European Research council.

With more than twelve years of experience and research, ADF archaeological team is the main research institution focusing on the Phnom Kulen archaeological sites.

© Laurent Bernhart
Topographic surveys are conducted every year on each of the excavation sites. International experts produce an accurate plan of the archaeological sites, locating the trenches made during the excavation and the ancient structures and carvings that have been discovered and studied. These plans are essential to describe and understand the architecture and construction techniques used by the Angkorian builders.

Topographic plans are also provided to APSARA to improve the management of the sites. In ten years, more than twenty sites have been surveyed by the topographic team. These plans are then integrated with the global archaeological map to improve its accuracy and the level of details for each surveyed site.

During the past archaeological campaigns, over 60 Cambodian students have had the opportunity to work side-by-side with international experts, getting practical hands-on field experience. In addition to their university curriculum, professional field experience is much needed for young Cambodian archaeologists to start their career. All of them are issued from the Royal University of Fine Arts, faculty of Archaeology in Phnom Penh.

During the excavation, they learn about information recording techniques (note taking, hand drawing, photography) as well as team management skills. During the post-excavation studies, they learn about inventories, digitalisation, identification of ceramics and database entry. Many of these young experts have subsequently been recruited by APSARA National Authority and other archaeological institutions.
.