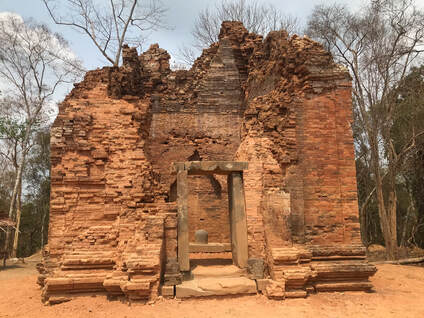 Phnom Kulen has always been of great archaeological, cultural, and religious significance. It is an important pilgrimage site for Cambodian people, and one of the few remaining tropical forests in northwest Cambodia.

To Cambodians, Phnom Kulen is famous for its large waterfall and holy sites. The waterfall and the Preah Ang Thom pagoda, with its giant Buddha statue, attract hundreds of visitors a day, even thousands during annual celebrations. For people interested in Angkor’s history, it is supposed to be the birthplace of the ancient Khmer Empire, for it was at Phnom Kulen that King Jayavarman II proclaimed independence from “Java” in 802 CE. During the Angkorian era, the relief was known as Mahendraparvata (“Mountain of Great Indra”).

To highlight its environmental value and ensure its protection, 37,500 hectares of this mountain range were turned into a protected area in 1993, under the name of Kulen National Park (KNP). It is also where the Siem Reap River, which flows through the whole Angkor temples complex, finds its source. In December 2012, UNESCO recommended that Phnom Kulen be included in the Angkor World Heritage Site. Since 1992, the Royal Government of Cambodia has registered Phnom Kulen on its tentative list as a future Work Heritage Site and recently (2020), this registration was re-submited including the remains of the ancient city of Mahendraparvata.

The most famous tourism sites of Kulen are the River of the One Thousand Lingas, the large Buddha of Preah Ang Thom, as well as the stone elephant of Srah Damrei. But there are dozens more temples and rock shelters, in various state of conservation, some of them dating back as far as the Eighth and Ninth Century that are less known though similarly important. Several prehistoric sites have also been located in the natural caves all around the plateau.

At odds with all its fascinating features, Phnom Kulen  is currently facing many challenges, with a growing population, deforestation and illegal logging.
.